The rising of the Balkanian Buzz

If you think that the music of our Eastern neighbours is all about folklore or the so called balkanbeats, well, you’re about to be surprised!

The music of our Central and Eastern European neighbours has been whirring for years, although barely noticed by the West. With social media and online streaming, we can, most certainly musically, hardly speak of a gap between Eastern and Western Europe. In Pristina people listen to the same music as in Brighton. But, like every country or region is culturally marked by the trails of its history, with music as a universal mean of expression, you’ll notice that the latest music from the Balkans has a history of illustrious predecessors. And that this new “Balkanian Buzz” combines the old with the new to rebellious alternative rock with a transboundary sound.

At the time of the Iron Curtain the citizens of Yugoslavia had more access to the Western music and culture than the citizens of its neighbours. Yugoslavia wasn’t part of the Warsaw-pact and chose its own path, independently of the West and East. In the ‘70s it already had its own punk, new wave and Yugorock movement that is still popular today in the now separate republics.

Thirty years later, mid 00s, as Yugoslavia is recovering from a turbulent wartime and is split in six states, a new generation of bands arises in the big cities of particularly Serbia, Croatia and Slovenia. In the Serbian capital Belgrade musicians, artists and public meet in the tenantless building BIGZ: the enormous former state printing office at the Sava river. It becomes the heart of the new alternative scene, with rehearsal spaces and a number of clubs. In a city where the ruins of bombardments are still visible, this new generation makes music: angered, brittle post-punk and alternative rock that imminently near you from the hollow rooms of BIGZ.

“Repetitor is seen as the trailblazer of the alternative scene in former Yugoslavia.”

At the heart of this new movement stands the Serbian alternative rocktrio Repetitor, formed in 2005 by Milena Milutinović, Boris Vlastelica en Ana-Marija Cupin. Their first live performances kicked off in the beginning of 2006, taking along a loyal group of fans everywhere they go; from Serbia to Croatia, Macedonia and Bosnia-Herzegovina. They release their debut album in 2008, that was received with praise by critics. It’s hardly possible to phrase it more strikingly than critic Dragan Ambrozić does: “[…] the ritual trance of the electric guitar at the end of the album, in the mists of the hectic sound in which the listener goes astray, left behind in a grim confusion where the survivors are different.”

Today, having released three albums, Repetitor is still solid as a rock and seen as the trailblazer of the alternative scene in former Yugoslavia. From the release of their latest album in 2016, they tour through almost entire Europe, Russia and China. Their latest adventure is a yet to appear documentary, filmed in the central prison of Belgrade where they performed for the ‘inmates’. A sneak peek can be seen in the clip of their latest single ‘Ako te ikada’.

“Western Europe can expect a new wave of gruesomely good post-punk and alternative rock coming up.”

After a brutal clearance by thugs, BIGZ is no longer the meeting point of bands and audience. It leads to the creation of a new home base: Kvaka22, co-founded by Ana-Marija of Repetitor. Kvaka22 is the central meeting point of musicians and artists. Next to Repetitor, other leading bands like Ti, Dogs in Kavala and Straight Mickey and the Boyz find their base here in the heart of the scene. They perform regularly together as well as participating in each other’s video clips.

Even more impressive is the transboundary impact of these new scenes. Because there is after all hardly a language barrier between Serbia and its Western neighbours, the bands tour through the entire region. A binding factor is also stimulated by Moonlee Records – the record label that keeps a lot of these bands under its wings – that has close contact with the scenes in Skopje (Macedonia), Zagreb (Croatia) and Ljubljana (Slovenia).

Western Europe can expect a new wave of gruesomely good post-punk and alternative rock coming up. Over the past decade, things have evolved in such a way that this Balkanian Buzz can easily measure itself to the Scandinavian Nordic Vibes of the recent years. And of course therefore you’ll see a devastating performance of Repetitor at Welcome to the Village!

Want to know more about Repetitor? Check their bio here!

Will you fight for freedom, in any form or shape? Do you want to raise a fist against violence against women? Then we call for you, to take part in the impressive and activist performance ‘RESISTANCE or the vindication of a collective right’. 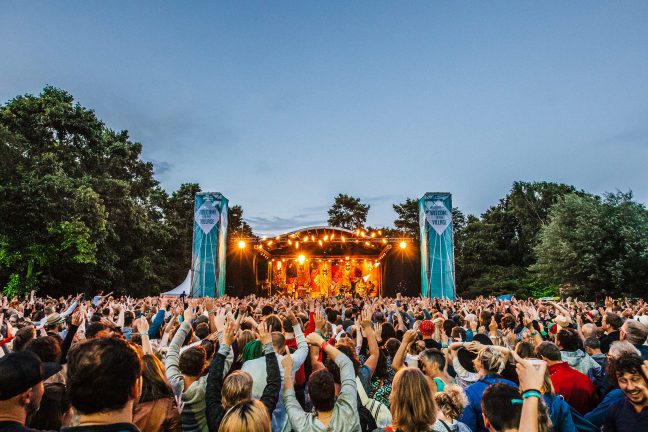